The United States are discussed after the crucial elections by Sheri Berman, professor of political science at Columbia University in New York, and Sławomir Sierakowski, sociologist, political analyst and president of the S. Brzozowski Association.

Donald Trump has not made America 'grand again', nor is there any chance of a return to 'old normality'. Even if the current president loses the elections. The social and political crisis, growing inequalities, hundreds of thousands of pandemic victims, the polarisation of the public sphere bordering on civil war - all this will be faced by the White House and all Americans in the next term.

How can a community be united and is a democratic post-Trump policy at all possible? And where is the place for progressive ideas in such a strongly divided society?

The United States will be discussed after the crucial elections by Sheri Berman, professor of political science at Columbia University in New York, and Sławomir Sierakowski, sociologist, political analyst and president of the S. Brzozowski Association.

We invite you on Thursday, 5 November 2020 at 18.00. The discussion in Polish will be available here:

and in English here: 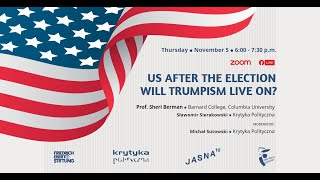